We are a friendly amateur choir based in central London, performing a broad repertoire from early to modern music. 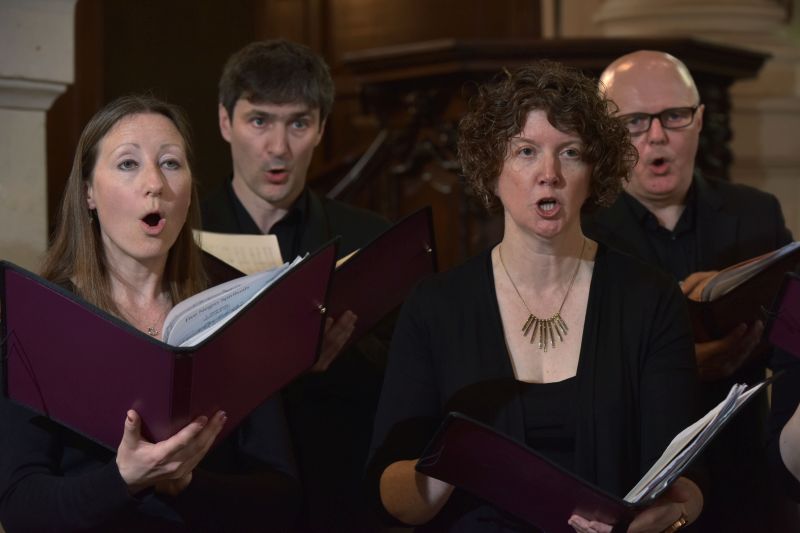 Founded in 1985, the Chandos Chamber Choir is an auditioned amateur choir of around 30 voices. The choir performs at least three times a year both within London and further afield.

Our repertoire is wide ranging, covering both sacred and secular music from the sixteenth century to the present day. The choir is equally comfortable performing a cappella or with keyboard, chamber-ensemble or orchestra.

Approximately every two years we make a weekend visit to a British or European cathedral to perform at their services. Recently visits have been to Winchester, Ely and Cork.

If you wish to get in touch with us, the best way is to email us.

Founded in 1985, the Chandos Chamber Choir, formerly the Handel Opera Chorus, is an amateur choir based in London of approximately 30 voices. The choir takes its name from the Chandos Anthems of Handel, in turn taking their name from the Duke of Chandos, Handel’s patron from 1718 to 1719. The choir has sung a number of choral evensongs at St Lawrence Whitchurch, Stanmore, where Handel was organist for the Duke of Chandos.

The Chandos Chamber Choir gave its inaugural concert at St John’s Smith Square on 20th October 1985, with the programme including a performance of Rossini’s Petite Messe Solennelle. Seven weeks later, on 8th December, a Christmas concert was given at Southwark Cathedral, which included three of Handel’s Coronation Anthems. In 2010 in celebration of its 25th anniversary, the Chandos performed all four of the Coronation Anthems at St Paul’s Knightsbridge.

Over the past 30 years, the choir has given concerts in many venues across London and further afield, including Oxford, Cambridge and Winchester. Its repertoire is wide ranging, covering both a capella and accompanied sacred and secular music from the sixteenth century to the present day. The choir undertakes regular Cathedral weekends and has performed at Salisbury, Ely, Lincoln, Winchester and Cork. Tours
to Italy and France took place in the 1990s and a highlight for many long-standing members was singing during a Mass in St Peter’s, Rome in November 1992.

Under its six Musical Directors, including Piers Maxim and Andrew Arthur, the choir has continually evolved, tackling a wide repertoire and always ready to take on fresh challenges. In 2011 it appointed James Davey as its musical director, who has developed both the repertoire and the sound of the choir to much acclaim from our regular audience.